After a ﬁrst contact with music at 3 years old, she begins to take her ﬁrst steps on the piano at 6 years old. Her formation as a pianist goes by brilliantly at the conservatories of her native town, A Coruña, where she ﬁnishes the Professional and Bachelor degrees receiving a cum laude mention in piano and obtaining the highest qualiﬁcations under the supervision of the teachers Isabel Peláez and Rosa María Rodríguez. Later, during her stay in the heart of Europe, she completes a Master in piano solo performance at the Royal Conservatory of Brussels, acquiring great distinctions and working along with the piano masters Dominique Cornil, Zoﬁa Lalak and Alexander Besant.

During her musical career she has had the opportunity to receive masterclasses from prestigious international ﬁgures of the piano such as Albert Attenelle, Pascal Rogé, Ivan Klansky, José Núñez, Sergei Yerohkin, Maria Keilin, Muhiddinn Dürrüoğlu and Giuseppe Albanese, among others.

Her collaboration in chamber music and orchestral ensembles has led her to investigate and to rediscover long forgotten musical pieces that are still unknown to the public. Since 2014 she is a member of the Galician Chamber Music Orchestra (OCGa), where she has participated in the development of the project ''Una noche española'', that exports to Europe the Spanish repertory. The role of the piano as a solo instrument has allowed her to make the 2019 debut in Brussels of the orchestral version of the masterpiece ''Soatiña'', from one of the most proliﬁc composers nowadays in Spain, Rogelio Groba. 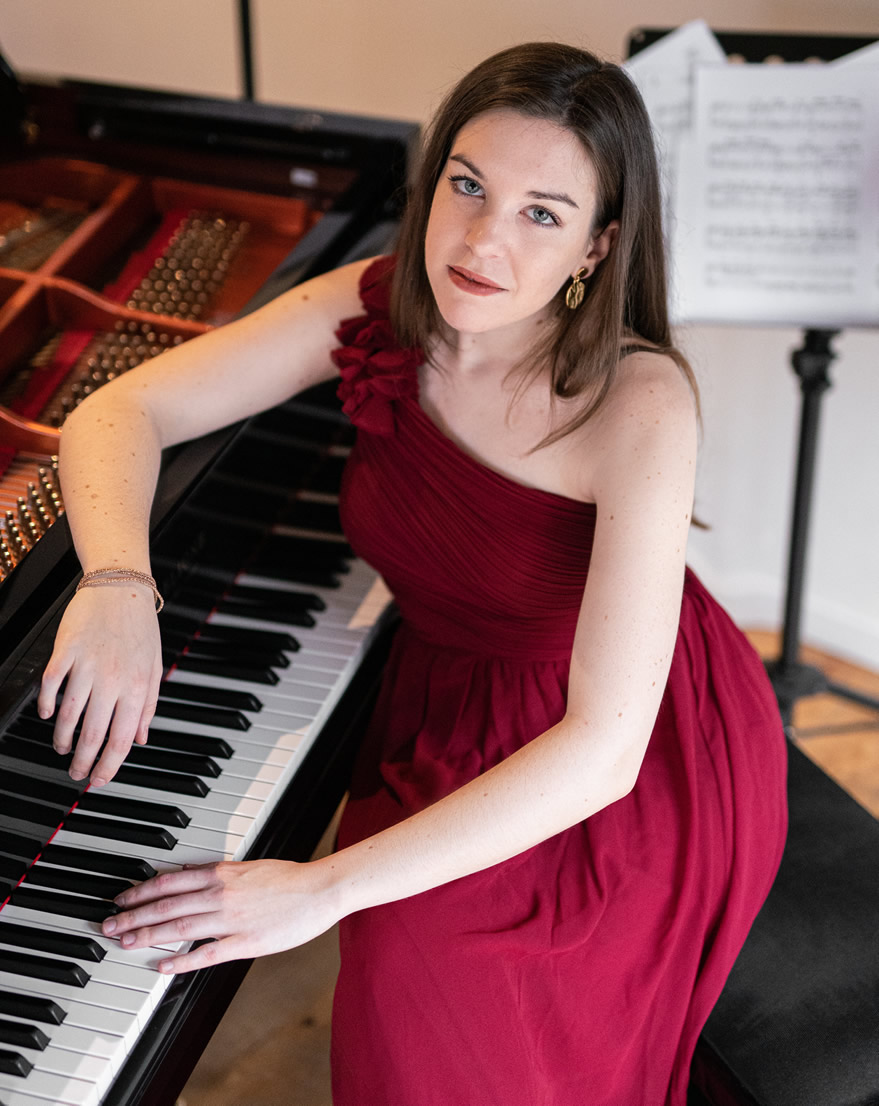 Over the course of her young musical career, she has been selected and invited to participate in many festivals and international concert series, such as the Yan International Festival (Liège, Belgium), Festival Groba (Ponteareas, Spain), Piano Meeting (Ourense, Spain), Festival Melide Clásica (Melide), ciclo de Novos Talentos Musicais (Santiago de Compostela, Spain), Les Ballades and Les Nocturnes from the Royal Conservatory of Brussels, between others. This intensive musical activity made her perform in many concert halls in Spain, Italy, Portugal and Belgium.

On the other hand, she has been awarded with several international prizes, such as the ﬁrst Prize of the Concours des Lauréats of the Royal Conservatory of Brussels, the Prize of Heritage Geroﬁ-Baschwitz (Belgium) and the International Prize of Music GianClaudio Chiais (Rome, Italy).

In the present day, Gema combines her pedagogue and concertist activities. By focusing on interdisciplinary projects, she establishes a strong tie between Spanish and Arabic music as a member of the Hayat Ensemble, she creates didactic concerts with dance and theatre with the duo Indigo and participates in the 2019 performance designed by the dancer Anne Teresa de Keersmaeker for the exposition ''Brancusi, Sublimation of form'' in BOZAR (Brussels)